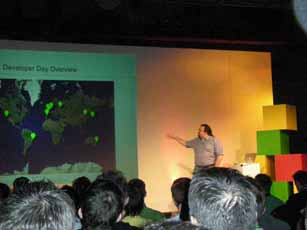 Chris Dibona keynoting Google Developer day in London. Open Source program manager at Google, Chris is ambassador at large among the Open Source and Free Software community. He is in charge of the Google’s summer of code program, and also the legal framework of licenses under which the Google releases and uses FOSS code.

As expected, the Semantic Web (with capitals) came up during Questions & Answers; Chris is candid regarding the intellectual ambition and scope of SW, and is skeptical of its practical application and adoption among web developers. Given the volume of content and wide-ranging approaches to developing the web, he thinks standards will evolve organically rather than be dictated top-down. A widely held view considering Tim Berners-Lee’s difficulty in forging concensus even within working groups at the W3C.

Ed Parsons, Andrew Eland and Peter Birch, geo-spatial technologists, gave a sweeping view of the geographic data in corporate networks and User-Generated data waiting to be collected and exploited. Excellent work integrating Google Earth and Google maps through KML files, the new standard for encapsulating geographic and viewing data together with the multimedia information.

Mapplet is the term for Google map widgets. A mapplet deploys data and functionality on a users’ Google map. Users can submit and select mapplets from Google’s mapplet open directory. The same as Google gadgets. Google Maps is fast becoming the platform to render and present geographic multimedia information AND functionality. With 200m downloads of Google earth and the strong Open Standards emphasis, the commons community seems to be adopting the platform rapidly.

Mike Astle, from online estate-agent Nestoria, was forthcoming about working and organizing a Google mashup company. Nestoria’s added value is geo-locating and processing estate agent information, either scraped or XML fed, onto Google Maps. Mashup business models are inherently fragile, as they depend on the whims of Google’s rapidly evolving Map/Mymap/Mapplet platform, and Mike sternly fielded the inevitable questions during the Q&A.

Whether Google’s creative commons ecosystem can also support businesses is still an open question. Only a few of the 50,000 Google mashups have revenues at present. Tellingly, Nestoria has built a buffer interface to Google maps, so as to allow swapping it out for Yahoo’s map service.

Gummi Hafsteinsson described the ease with which mobile web can be developed nowadays. The new converging xhtml standards allow a KEEP IT SIMPLE approach which eases targeting a particular mobile device/mobile user for a particular service. Google’s mobile index is becoming the focus of conversation, as it is central for accessing mobile internet users. Gummi described how the newly relaunched index combines so-called transcoded and true mobile web sites to provide optimum results for the mobile user.

The big announcement was Google Gears. The ability to use Google spreadsheet, Google documents, Gmail and Google Reader while not connected to the internet. Google’s office suite can now be used in lieu of Microsoft’s Office suite. Google has stepped out onto the desktop software arena, no question.

Members of the Hispavista innovation team were present, with their boss Jon Elosegui, to hear the latest update on Google’s APIs for the various mashup projects in incubation. User Generated content is increasingly geo-tagged and Google maps renders such tagging best at present. With Google Developer day ongoing in 10 cities, we were not alone.