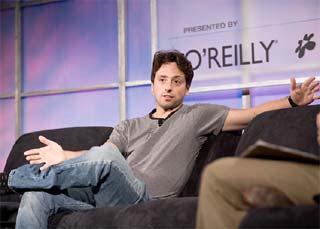 Maturity is slowly creeping up on Google as it reaches its eighth birthday and its stock market valuation exceeds $100 billion. Disruptive innovation is giving way to incremental improvement; “more features and less products”.

Circumstances have forced Sergey Brin, the master mind behind
Google’s 70-20-10 innovation strategy, to move to a 90-10 approach. Ninety percent standard incremental development, and 10 percent disruptive original products. The problem being that the continuous stream of new products have been badly integrated and are confusing to users. Moreover, Sergey Brin states


“It’s worse than that, it’s that I was getting lost in the sheer volume of the products that we were releasing.”, [Via Los Angeles Times]

As any innovation professional knows, there comes a time when spells of green-hat lateral thinking have to be balanced out with black hat rational ordering. Fertile creative class lists of provocative disruptive ideas, projects and possibilities have to be balanced with a black hat rational execution of ideas. At the end of the day, as corporate management consultants like to point out, it is in the execution, realization and monetization of ideas that companies reach the market.

Even with over 8000 development staff, Google is coming up with more ideas than they can develop and successfully launch. Hacker has to give way to structured software development teams. Like all modern factory production techniques, the structured approach is more productive when it comes to delivering specific projects. Even Linux Open Source development often has a core of hierarchically ordered developers to maintain basic order and quality.

According to Eric Schmidt, Google’s CEO,

“The result occurred precisely because we told these incredible engineering teams to run as fast as possible to solve new problems. But then that created this other problem.”

Sounds like Boston Consultancy Group matrices are to make an appearance at Google, and introduce heavy rationality in their project selection. What next ? Suit and tie instead of T-shirts ?