which offer maps of interesting places submitted and reviewed by their community observe with apprehension. Google has only introduced a simple sharing function for the maps; social aggregation and filtering or tagging are, so far, absent.

Google should offer assurances to companies collaborating and cooperating through Google’s web services and APIs. Google should signal it will refrain from entering their space, otherwise Google’s open commons community, and crowdsourcing ecosystem will vanish. 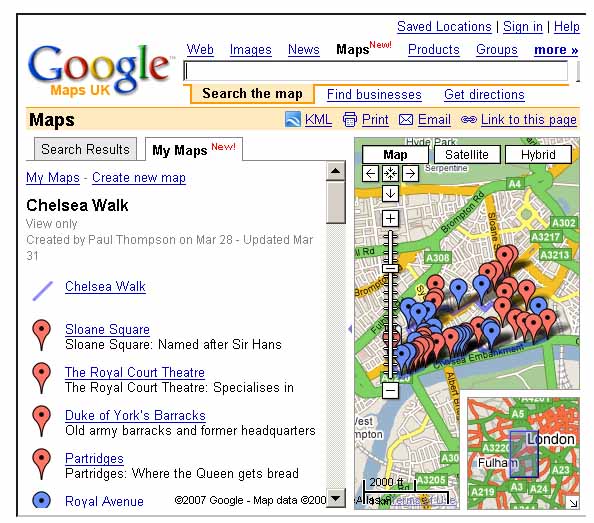 The new firefox version is available for free here. The speed at which it displays pages has increased, and it improves the tabs used to view many web pages in one browser window. Microsoft has copied the tab feature in its latest release of Internet Explorer.

The open license Firefox is claimed to have close to 15% of the browser market, while Microsoft’s market share has declined by 10% in the last year, as shown in the Google Trend graph below Microsoft Internet Explorer, Firefox

The Open Document movement, from the OASIS industry consortium, is slowly but surely wresting Microsoft’s market dominance in word and spreadsheet applications. The Oasis consortium is formed by government and public institutions around the world, as well as software vendors that commit to public licenses.

Governments all over the world are starting to demand a common open standard for their documents, such that they are no longer limited to using Microsoft’s Word and Excel applications. The idea is that documents are stored in an open public domain format, such that anybody can write a program to process the document; all software vendors can compete in providing a word and spreadsheet applications.

Best of all, the open source openoffice.org suite of office applications, are free to use. The office suite includes word processor, spreadsheet, presentation, vector drawing, and database components. It is available for any platform, including Linux and Microsoft.

The commonwealth of Massachusetts leads the push to make an open document format obligatory. WIth so much pressure Microsoft has had to respond and open its proprietary binary document formats. The first step has been to set up its own XML-based file formats, and granting a conditional public license for its use; its Office Open-XML standard. The downside of the standard is that it is taylored for Microsoft Office Suite, in addition to a license prohibiting some competitors from using it.

In the most recent breakthrough, Microsoft has announced it will also support the Open Document Format (ODF). Thus Microsoft Office documents will be open to other applications, like the free openoffice.org free editors and spreadsheet software, opening Microsoft up to huge market pressure.

The development of the document standards has been accompanied by strong debate. One the one hand figureheads from Microsoft, like Brian Jones, who is a leading player in the Microsoft Office team, and developers at IBM and SUN who are part of the Oasis and openoffice partners.

In spite of the continuing debate over the pros and cons of the two standards, the fact is that Microsoft is having to embrace a public domain format based on the XML, which is the bedrock for the long term commons vision of the web.

The Recording Industry Association of America (RIAA) has filed thousands of copyright infringement lawsuits against filer sharers on networks like Kazaa and Napster, who have all accepted to pay damages to avoid going to court.

The recording industry has artfully developed a variation of the “John Doe” lawsuit program that offers plaintiffs the opportunity to settle. After learning the identity of an illegal file sharer through a “John Doe” lawsuit, but prior to amending the complaint to reflect the infringer’s name and address, the RIAA offers the opportunity to settle the case before proceeding further with the litigation. So far, all the accused Kazaa and Napster users have had no recourse but to settle, paying $2000-$3000 to the RIAA.

Shawn denied any wrong doing, and has evidence that he had already purchased the DVD in question. After some careful thought, Shawn has decided to set aside a hundred thousand dollars to pursue the case through the courts. Shawn has to countersue and win damages so it sets a legal precident for a class action lawsuit against the MPAA.

The MPAA has responded, “Mr. Hogan has said, he is absolutely going to go to trial, and that is his prerogative” says John G. Malcolm, the MPAA’s head of antipiracy. “We look forward to addressing his issues in a court of law”.

If Shawn wins the case, the MPAA will have stop its terror campaign on the millions of file-sharers. Morever, they will have to pay damages to many of the people from which they extorted a settlement, typically children, students and pensioners. A heroic deed.

Yell Limited have accused Yellowikis of “Passing Off”. The largest publisher of yellow pages directories in the world have written to Paul Youlten (co-founder of Yellowikis) saying they believe Yellowikis is

“plainly purporting to be associated with (Yell)” and “this amounts to a misrepresentaion… which may result in third parties associating (Yellowikis) with our client (Yell)” … “The continued presence in the market of your website will cause substantial damage to (Yell’s) good will and reputation”.

Yell’s solicitors are demanding that:

David versus Goliath story; an example of monster corporation taking advantage of the current
pro trademark and copyright legislation to kill off a startup. Picked up from Ross Mayfield’s Weblog: Yell Threatens to Shut Down Yellowikis.

Yell.com is already under investigations for monopoly abuse of the directories market in the UK. Yell.com recently bought TPI, yellow-pages Spain, to maintain market growth in spite of Office of Fair Trading investigations in the UK. The architypal incumbent ex-state monopoly.

Yellowikis is a yellow page service in wiki format. Rosa Blaus suggested to her father, Paul Youlten, that they set up Yellowikis after she noticed small businesses were deleted from Wikipedia for not being “encyclopaedic”.Yellowikis has been growing at 8.7% month-on-month and has 494 editors and about 5,000 articles listed.

Yell is demanding that Paul and Rosa close down the website, transfer the domain names to Yell and agree to pay damages to Yell for loss of profits. Yell made $2.4bn in 2005, whereas Yellowikis had a loss of $500. The $500 was used to print T-shirts promoting Yellowikis at the Wikimania conference in Frankfurt.

Given the dubious nature of the yell.com case, Paul and Rosa may survive the cease-and-desist and its subsequent arbitration with a little legal help from a Creative Commons institution, and digital rights activitists at the EFF.

When asked recently, Eric Schmidt’s answer to the question was

It’s better to think of Google as a technology company. Google is run by three computer scientists, and Google is an innovator in technology in our space. We’re in the advertising business, 99% of our revenue is advertising-related. But that doesn’t make us a media company. We don’t do our own content. We get you to someone else’s content faster.

The question is central to many web service companies. What is our core competency ? What is a must for our future ? Are we technical, are we media, or are we marketing & sales deal makers ?
Choosing advertising and selling is extremely tempting. Operationally and day-to-day these skills and departments have the biggest impact on the bottom line.
But time again technology disrupts the market. Your core competency must be in whatever disrupts your market most. One constant, in words of innovation guru Seth Godin, is that safe is risky; you innovate or you die.
For web service companies, it is technology that is disrupting the market. You miss the boat in technology, even when your revenue is from advertising, and you are sunk.
from LA Times inteview of Eric Schmidt.

Big discussion on the blogosphere surrounding O’Reilly’s “web2.0” trademark. Tim O’Reilly prevented a not-for-profit organization using the term “web2.0” in its conference title, alleging trademark infringement. Though the dispute has been settled amicably, the communications from O’Reilly’s PR director has been very poor. In, fact my Communications Director would first flay me alive if I committed such a faux-pas, and then redress the damage to the company image a lot more effectively.
The problem is not so much the substance, but the appearance and perception by others of his trademark complaint. Tim is a champion of the hacking community, where commercial aggression is frowned on, and kudos comes from contribution to the commons and intellectual prowess. Tim is in fact a great champion of the patent abuse issues. He wrote Jeff Bezos an open letter complaining about patent abuse with Amazon’s one-click purchase patent request.
With such a dominant image among the creative commons community, which is his main customer base, Sara Winge, VP of Corporate Communications, should advice and influence Tim more strongly. In fact, I dont envy Tim’s return from holiday. Nevermind the rest of us commenting on his faux-pas; Tim’s biggest problem will be Sara Winge taking a baseball bat to his head.