It is true that the depreciation in telcos impact substantially on their return on equity. The telco infrastructures are expensive to maintain, specially when the investment was ill judged during the 2000 boom. Few ISPs are covering their depreciation with capital investment fully. An unfortunate fact for telco shareholders and directors.

Telcos would generate better profits by abolishing network neutrality, at the expense of profits for society as a whole. Large telco companies, specially encumbent former state companies, are not known for the wealth creation abilities. Small entrepreneurial companies have historically been the biggest source of GDP growth.

Giving further market concessions to a mature industry sector with a poor track record, at the expense of the small entrepreneurial company sector is short termism at its best

Quoting Susan Crawford blog it is a question of trust:

Why should we trust them now? We’ve already given them incentive after incentive, access to rights-of-way (presumably in exchange for common-carrier behavior, as Dan Berninger points out), and the regulatory shirts off our backs.

Radio listeners are turning to the web, Web gets more listeners than AM/FM. The news is

People using the web to listen to radio during the evening now outnumber those using traditional AM or FM receivers, according to Virgin.
Nearly one in four (24 per cent) listens online compared with 21 per cent who tune in to analogue broadcasts. Seventeen per cent use digital (Dab) radio and nine per cent get the programmes via their TV. The remaining 29 per cent represent the proportion of Virgin regulars who do not tune in at all on a given day.
The figures cover listeners outside London where the reception may be weaker.

A trend that should lead to the opening of parts of the AM and FM spectrum. The narrow ranges of spectrum used by the 802.11 standard have shown how much value can be generated when a communications medium is made available to all.

Good news for open spectrum activitists , who advocate that availability of spectrum for license-exempt use has enabled us to develop cost-effective, user-owned networks to provide Internet access and localised information services for the benefit of many thousands

An extract from Cisco’s letter to congress, Cisco on net neutrality, reads as follows,

“We strongly support the principle of an open Internet,” Cisco CEO John Chambers wrote in a letter to Congressman Joe Barton, who chairs the House Energy and Commerce Committee. “We must, however, balance the fact that innovation inside the network is just as important as innovation in services and devices connected to the Internet. Broadband Internet access service providers should remain free to engage in pro-competitive network management techniques to alleviate congestion, ameliorate capacity constraints and enable new services.”

I cannot help but think a good arms trading company would issue an identical statement on arm sales limiting legislation.

Martin Varsavsky is the ultimate disruptive innovator for the telecom’s sector. His companies have grossed billions of dollars in the retail end of the market. He diagnoses plain short term greed as telecom companies try and squeeze internet media companies for a part of the high margins.

In this case, it is fortunate that Europe regulates its markets more vigorously than the US. France is quoted as a good example of how IP transit business is forced to operate at arms length with its financial sales operation.

Newspapers are the best souces of trusted information on the web, argues the managing director of Times Newspaper. Speaking at at the Internet World conference in London on Tuesday, Paul Hayes dismissed that wisdom can originate from the collective output of a diverse, independent and decentralized community. He argues power is unlikely to shift between consumers and media owners – “Why Newspapers will Win on the Web”.

“Some blogs are conversations among people you’d frankly prefer not to meet, others ar cries for help and their writers are clearly in need of therapy. Others are just people expressing themselves, which is an entirely honourable pursuit, but would you like to meet this geek on a dark night?”

“Millions of blogs have sprung up over the last year, but a cursory search shows that the majority of their information sources lead back to mainstream media. The bloggers are seeking or delivering insight, but what they need is accurate information on whatever subject they’re interested in. Time and again, bloggers draw their readers’ attention to what they have read in papers, such as the Times.”

“Blogs will be a continuing part of content output, but only a relative few will be read beyond the narrowest of audiences. Most of them will disappear unnoticed, and frankly unmissed by the world.”

Clearly, the wisdom of a collective does not exist in Mr Hayes’ world; the madness of the crowd is the rule.

These lists of most popular blogger contributions are gaining huge readership as an alternate source of Trusted news. Aggregator sites like, slashdot.org, del.icio.us, digg.com, and technorati.com are experiecing explosive growth. The sites rival “The Times” Online in readership, and the news items come from millions of contributors.

Mr Hayes may be telling a different story next year, as the quality of the news and stories emerging from millions and millions of contributors take center stage. 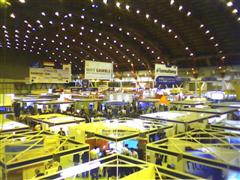 London Internet World exhibitors have filled three quarters of London Olympia 2 hall for the first time since the 1999 and 2000. That is 171 exhibitors, and a projected 10,000 visitors. With no less than three mapping services in attendance; streetmaps.co.uk, multimap.com and mapsolute, compared with only mapquest.com in 1999.

The figures touted by most presenters today were

Heady stuff. The rumor is that boo.com, the £185m disaster the UK internet bust flagship, will be resurrected this year.

Tim identifies addresses the difficulty of design legislation as a worthy undertaking, and cites France with its separation between IP providers and business in other layers as a good example for the US.

Dan Gillmor, the daddy of grassroots independent journalism on the net, has given a seminal speech
on the role of blogs in maintaining transparency and independence of journalism. In Dave’s words,

The cable and phone companies want to control not just the pipes through which our data moves. They also want to decide what will get delivered, in what order, and at what speed. They haven’t pulled this off yet, but they’re getting closer every day.

In this age of media consolidation, where newspapers and TV channels are owned by fewer and fewer companies, maintaining a free speech medium like blogs and the internet is imporntant for civil liberties.

Free computing and free storage on the net. Dave Winer, one of the creators of the whole RSS movement, gives us an example of the payoff in keeping the net neutral. The dream of free network computing and network storage accessible for all takes a step closer. Dave predicts 2006 will be the breakthrough year. Place a file on your web page, and your users can download it with no bandwidth cost to you. How ? the bittorrent network.

Dave predicts, all browsers will allow transparent bittorrent download of files by the end of the year. Amazon will lead the way,

Amazon ships S3, a public utility storage system, with native, automatic BitTorrent support. You can access any object in the the S3 store through BitTorrent as easily as you access it over HTTP. All the details are taken care of automatically. This is the prototype for server-side BitTorrent support — completely automatic and transparent.

Next steps for BitTorrent.

Free computing and free storage are around the corner. An example of the potential provided by net neutrality

Net Neutrality provides the freedom that has made the internet a great creative commons. It guarantees that the telecom carriers and ISPs do not interfere with the flow of information on the net; it stops them from interfering with the flow of data for profit. Telecom lobbyists are arguing that they should be allowed to sell different levels of service, at different prices. And CISCO is providing the equipment to filter internet traffic according to commercial rules.

Traffic to big corporate web servers would have the right of way over small company traffic. In clear corruption of the internet early values, as described by Lawrence Lessig , famous for his book Future of Ideas, calls it the end-to-end principle so essential for the internet to continue to be a creative commons, where anybody can connect anything from anywhere on the internet.

The future is being sold to industries of the past.

Yet, Net neutrality is so easy to take for granted. Like free breathable air, freedom of speech, freedom of movement. You only notice them when they are absent or taken away from you. I think many non-militant people will become radicals pro-freedom activists, when big business puts its first filters in.

Small business entrepreneurs are the first into the fray. As a technologist and entrepreneur it is unthinkable that new statups companies should have to ask permission and pay for the privilege of connecting my web servers to the internet. The loss of net neutrality will kill off hundreds and thousands of startups with enormous potential.

The political battle is currently ongoing in Washington. Recently the telecom corporations had a victory, as net neutrality legislation was set back Telecoms groups turn back plans for net price controls, a few organizations lobbying to maintain net freedom are

There is so much we take for granted
Paul Elosegui